Geographic Information Systems (GIS) represent a combination of hardware, software and data, which allows for the capture, management, analysis, and display of geospatial (geographically referenced) information. In a GIS, layers of spatially explicit data are linked to tabular (attribute) data in relational databases, allowing the user to analyze and visualize patterns and trends.

From an information management standpoint, the architecture (structure) of a GIS can be split into three main components, each contributing to its core functionality:

This three-tier architecture of GIS systems allows for a number of operational implementations, differentiated by the location of the main components and services (Longley et al., 2010):

Developments in GIS infrastructure have brought about a diversification of software components tailored for specific configurations. Today, “traditional” desktop GIS still serve an important segment of the GIS user base, while centralized desktop GIS remain common in enterprise implementations. Web-based GIS is registering rapid growth, due to the unique combination of ease-of-access and opportunities for collaborative/shared work presented by cloud computing. Figure 3 shows some of the most representative GIS software packages (both commercial and open-source) within the three-tier GIS architecture. 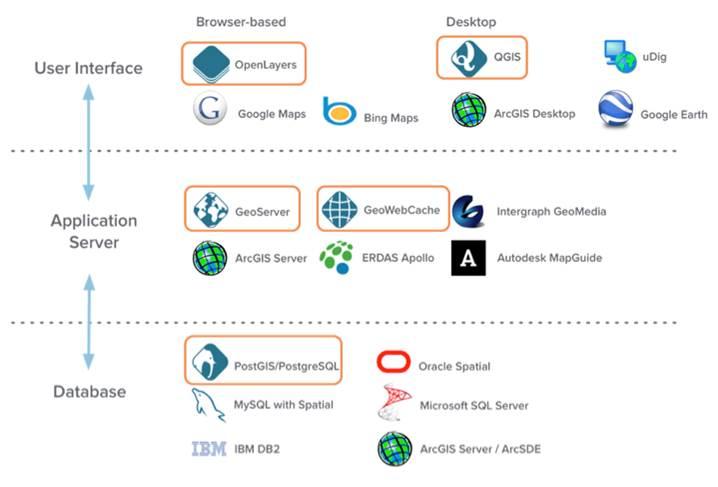 GIS data can be separated into two categories: geospatial data (spatially referenced data, representing data that is referenced to locations on Earth) and attribute data (any type of additional information linked or which can be linked to spatial data; typically organized in tabular format). Figure 1 displays an example of spatial data and associated attribute information in a GIS. 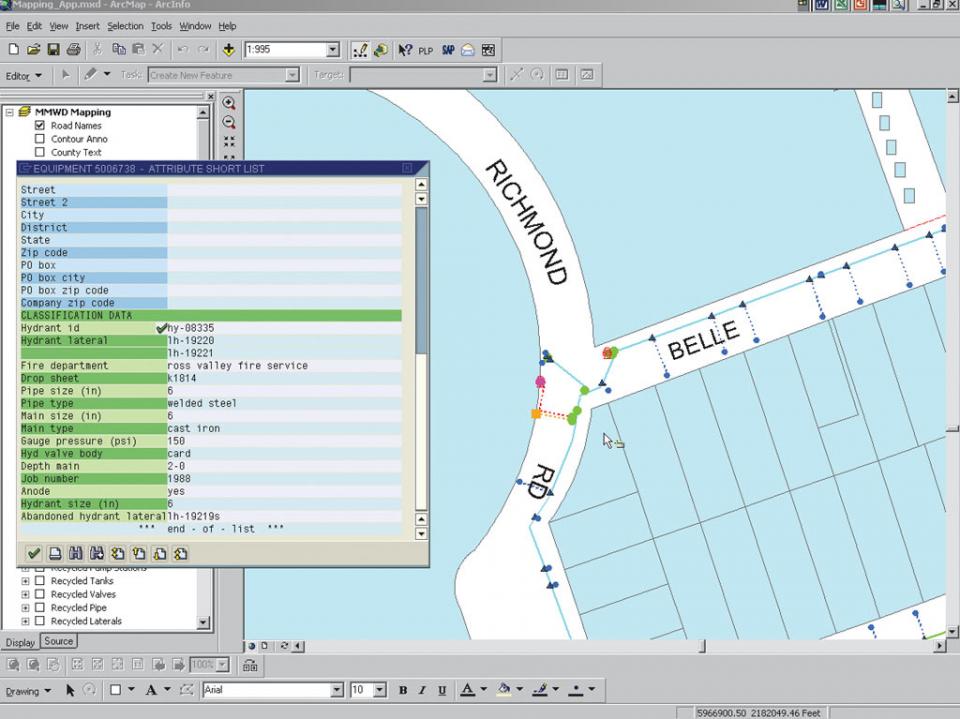 Spatially referenced data can be grouped into two main types: vector and raster. These correspond to two different models (Figure 2) of representing geographical space. The core capability of GIS software applications is their ability to manipulate and analyze vector and/or raster data.

Raster models are an abstraction of the real world where spatial data is organized into a regular grid structure of rectangular cells. Surfaces are represented as a mesh of discrete units, while the location of the cells is “encoded” within the ordering of the data matrix, as opposed to the explicit location storage of vector data.

Both vector and raster data have their particular features, advantages and disadvantages: 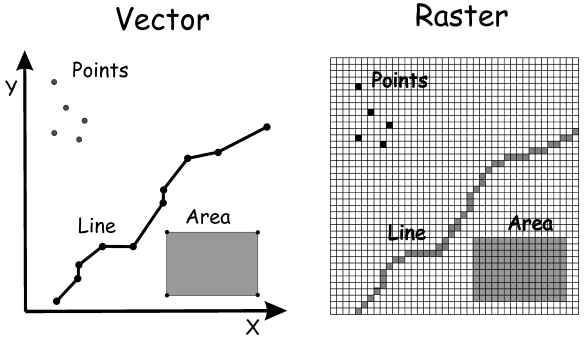 GIS is an important tool for both researching and managing water resources. Its capabilities for integrating, processing, visualizing and analyzing spatial and temporal patterns make it extremely useful in supporting the daily work of water management practitioners around the world.

Some of the key applications of GIS in water resources management are:

Given the implementation and scope of the GIS tools used in water resources management, we can categorize them as:

Generic – GIS tools and packages that provide core geospatial analysis / data modelling capabilities. A fully-fledged GIS implementation contains a wide range of data transformation, analysis and visualization tools that are useful for all scientists and practitioners working with spatial data.

Generic GIS packages typically provide the analytical platform in which additional, specialized tools can be integrated. An important and growing trend in GIS technology is increased interoperability between GIS packages in both data and tools. In practice, this allows the user of a specific GIS platform to access/process not only data generated by a different platform, but also tools which are not part of its core functionality. Both commercial and open-source GIS software packages can typically be customized with additional functionality, through high-level scripting languages and web-services.

Specific GIS tools are either developed for a particular platform (typically the case for commercial and proprietary software), or can be used cross-platform (usually the case for open-source applications). Specialized analytical GIS tools released by the largest commercial GIS suppliers belong to the first category. We can list here, for example, the ArcHydro and Groundwater tools developed by ESRI for its ArcGIS platform, or the water distribution, wastewater and stormwater applications developed by Bentley for its CAD-based platform. A growing number of free and/or open-source hydrological tools are available to water resources management practitioners. Their core GIS capabilities are typically significantly more limited than those of generic GIS platforms. For this reason, they typically borrow GIS functionality from the latter (e.g. the Water Observation and Information System - WOIS, developed around QGIS), focus on data modelling (e.g. EPA’s EPANET for water distribution piping systems), or both (e. g. the widely used Soil and Water Assessment Tool – SWAT, which can be run as executable or as an extension to ArcGIS or QGIS).

Irrespective of particular projects of interest, working with geospatial information and GIS requires some level of familiarity with one or several generic GIS platforms. Starting with the well known ArcGIS platform developed by ESRI, a number of other established GIS software packages exist, both free and commercial, with their respective strength and weaknesses. Following is a table listing 20 of  the most popular GIS platforms in the world today (both commercial and open-source/free), with a summary of their respective advantages and disadvantages, according to a September 2015 review of the “GIS Software Landscape” published on gisgeographer.com. 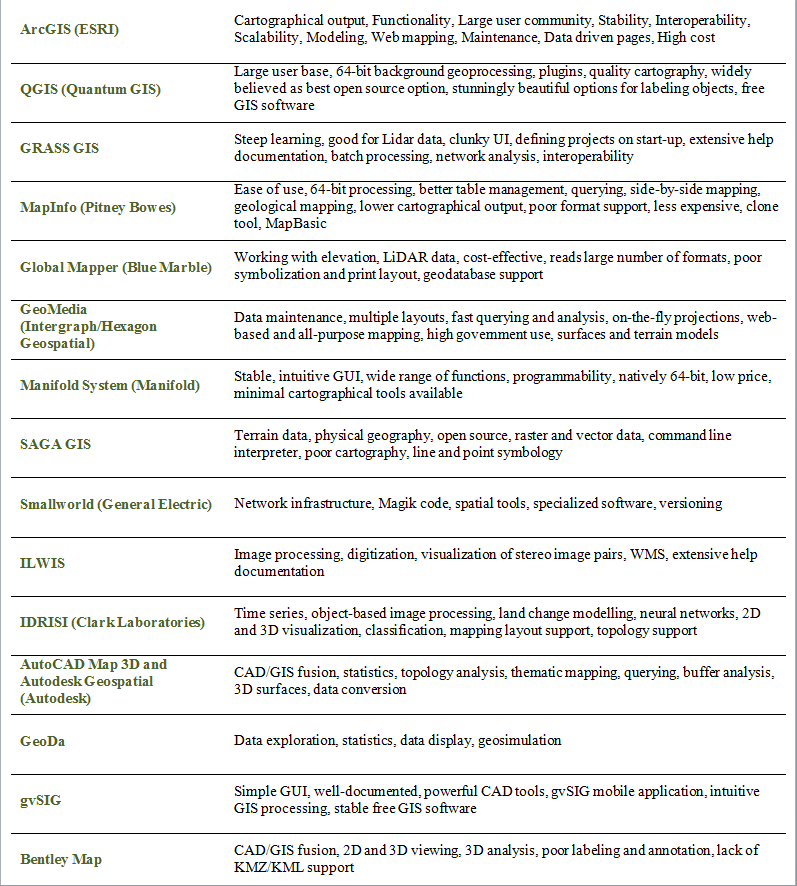 GIS Based Communication Platform for the Sustainable Management of Transboundary Water Resources in Lithuania, Poland, Belarus and Kaliningrad Region (Russia)

GIS Based Tool for the Landscape Retention Planning

Modeling and Visualization of Water Use in an Arid Region: Case Study from El Paso, Texas-Ciudad Juarez, Mexico