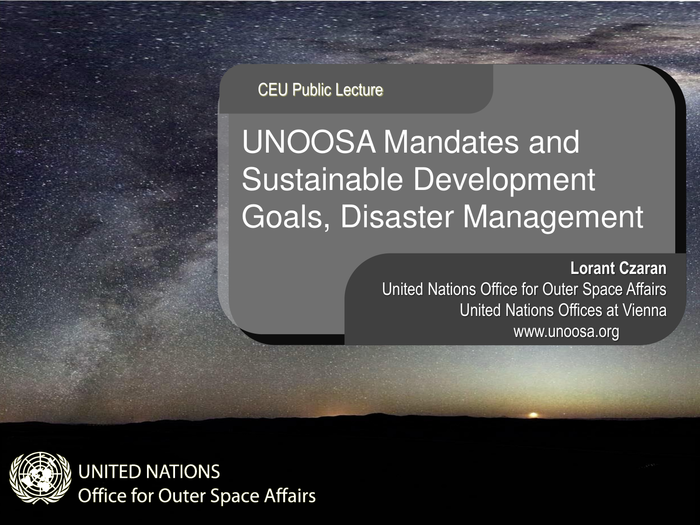 As part of ISEPEI's latest activities, Lorant Czaran of UNOOSA delivered a presentation on "Space Technologies and SDGs" at Central European University in Budapest. His presentation is available at: http://isepei.org/broadcasts. ISEPEI will be broadcasting a series of lectures by Eye on Earth members which will be made available for the public, Central European University students and faculty, and Eye on Earth communities through the ISEPEI website. See details of the first broadcast below.

a public broadcast by

ABSTRACT. Mr. Lorant Czaran’s talk will introduce the Office for Outer Space Affairs in the context of the United Nations, mention treaties related to space utilization, and discuss some of the mandates of the Office, including UN-SPIDER (UN’s Space-based Information for Disaster Management and Emergency Response). Mr. Czaran will address the upcoming Sustainable Development Goals (SDGs) and assess how many of those goals and the indicators to monitor them are dependent on space technologies, and finally summarize how UNOOSA supports states, NGOs, and other organizations in capacity building and providing access to space-based data and other technologies.

ABOUT THE SPEAKER. Mr. Lorant Czaran is since 2012 a Programme Officer in the Space Applications Section of the United Nations Office for Outer Space Affairs, supporting both the Programme on Space Applications and UN-SPIDER (Space-based Information for Disaster Management and Emergency Response), and is well known across the UN community for his commitment towards innovative geospatial solutions in support of the UN system work. During a long UN career since 1996, Mr. Czaran has worked at UNEP/GRID-Arendal in Norway, at the UN Headquarters (Cartographic Section) on UNGIWG coordination and Security Council affairs, and later at the Department for Peacekeeping Operations where he helped produce the first in-house digital satellite imagery-based topographic maps at large scale (for the UN Disengagement Observer Force in the Golan Heights, Syria) and worked on international boundary demarcation mapping projects (such as Cameroon-Nigeria or Eritrea-Ethiopia). Mr. Czaran also served as the Map Centre Manager for ReliefWeb/UNOCHA before joining UNOOSA in 2008, first as the Head of the UN-SPIDER Bonn Office where he was instrumental in facilitating support with space technologies during the response to the major Haiti earthquake in 2010. Mr. Czaran is an acting representative of the United Nations in specialized international bodies such as the Committee on Earth Observation Satellites (CEOS), ISO/TC211 and the Open Geospatial Consortium (OGC).

Mr. Czaran has been involved in CEU activities since 2014 through the ISEPEI Project, having taught several sessions in the ICT workshops in 2014-15. See more about ISEPEI’s recent activities here: http://isepei.org/, https://syslab.ceu.edu/, and http://www.ceu.edu/article/2015-08-19/isepei-brings-eye-earth-summit-ceu